The standard 2017 Nissan Titan will be making its way to dealerships come this summer. (The Titan XD is currently available already.)

The Titan will be available with two engines, one of which has not yet been announced, but we do know it will be a V6. The other option is a 5.6L V8 capable of 390 HP.

All-new for 2017, the standard Titan features all new technology as well as a more aggressive, yet sophisticated exterior design.

The Titan and its XD counterpart may look like they share a very similar style, but it’s quite the contrary. Not a single piece or part is shared in common between the two.

The 5.6L Endurance V8 gasoline engine will be paired with a 7-speed automatic transmission, while the truck will be available in rear-wheel drive or four-wheel drive.

Equipped with NissanConnect, drivers will be able sync their smartphone with their vehicle’s infotainment system in order to access a world of communication, navigation, and entertainment technology.

There isn’t a clash between the two Titans, but for the past year, the 2016 Nissan Titan XD has proudly spent its time flaunting its all-new Cummins turbo engine and fulfilling a niche that never before existed–an “every duty” truck. Where does the XD fit within the Nissan truck lineup? It’s a stepping stone; a half ton truck with heavy duty capability.

Meanwhile, Nissan fans and truck-buyers alike have been waiting for the non-segment jumping Titan. The standard, but redesigned, half ton Titan features new looks and better capabilities than ever before. And while the 2017 Nissan Titan in Glendale Heights, IL and Titan XD may bear a similar resemblance, there is nothing the two share in common. According to Nissan, the Titan siblings don’t even share a single lug nut.

Size-wize, the Titan XD is the larger truck of the two; the standard 2017 Titan is about a foot-and-a-half smaller, and despite this, both have the same size cabins. Passengers won’t have to worry about being scrunched or squished, there is plenty of personal room as well as interior storage in addition to the bed. In total there are three bed lengths to choose from: 5.5 ft, 6.5 ft, and 8 ft. as well as three cab options: Crew, King, and Single. 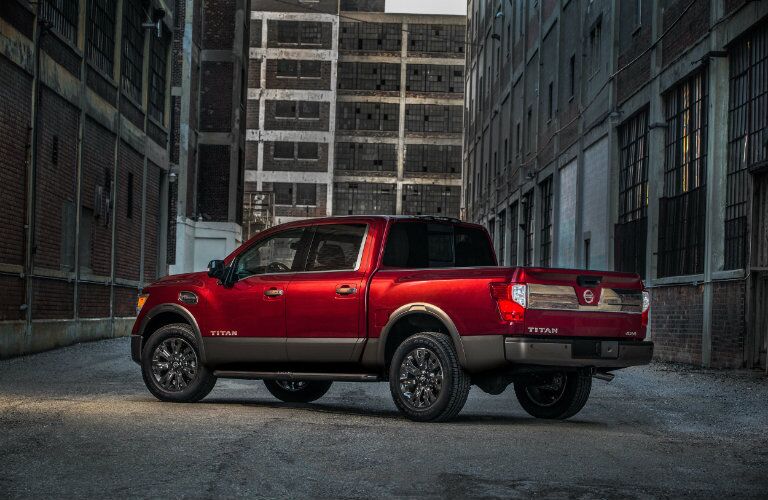 2017 Nissan Titan: Tried and True with All New Technology

Standing before us with its big mesh grille and alluring headlight display, the 2017 Nissan Titan will be going on sale come this summer. In total, it will be offered in five trim levels: S, SV, PRO-4X, and Platinum Reserve. Both rear-wheel drive and four-wheel drive configurations will be available depending on the jobs asked of the all-new Titan.

While there is work-specific technology and nuances unique to the 2017 Nissan Titan, it also will be available with NissanConnect, the automaker’s infotainment system. Without futzing with your phone while behind the wheel, you instead will be able to stay focused and safe as you are able to explore the navigation, entertainment, and communication of NissanConnect.

Pickup truck shoppers in the Glendale Heights area who are interested in learning more about the 2017 Nissan Titan or the currently available 2016 Nissan Titan XD are welcomed to come by in the near future to learn more schedule a test drive today!