Without even breaking a sweat, maximum towing capacity for the Armada is rated at 8,500 lbs.

Able to accommodate up to 8 passengers, the Armada also does offer a seven-seat option for those who choose Captain Seats for the second row.

The 8-inch touch-screen navigation system comes standard and features Voice Recognition as well as NavTraffic--you’ll even be able to receive 3-day weather updates.

Thirteen built in speakers, which includes two subwoofers, are sure to enrich your listening experience and bump the best sound possible while playing CDs, streaming through your smartphone, or while listening to SiriusxM radio.

In addition to standard safety, the Armada will include advanced security options as well, which include intelligent cruise control, blind spot warning, and backup collision intervention.

What is that?!? And where is the 2016 Nissan Armada?!? Ladies and gentlemen, we would like to introduce you to the all-new Nissan Armada that will be coming late summer of 2016. Because this was such an involved redesign, Nissan glossed over the 2016 model year and went straight for the kill. The 2017 Nissan Armada in Glendale Heights, IL is more sophisticated and refined than ever before, but don’t think for one moment that it has left its ruggedness behind by any means.

Big changes have been made to the 2017 Armada; the biggest of which is that it greatly resembles the Nissan Patrol that is sold overseas. Because it now shares the body-on-frame platform with the Patrol, this has opened up the gateway to debut a more chiseled body and sophisticated design. It boldly bears a brand-new grille that makes for an aggressive expression and fits well within its muscular front fascia. On either side of the grille are bright and brilliant LED headlights that do more than illuminate the night, but they make a bold and enticing statement too.

The all-new Armads will be available in three trim levels: SV, SL, and Platinum. All three of which will be powered by the same almighty 390 HP 5.6L V8 engine that delivers 401 lb.ft. of torque. Rather than the 5-speed found in the current breed of Nissan Armadas, the 2017 model will instead enlist a seven-speed automatic. Fuel economy has not yet been released, but we do know that drivers will be able to choose from a rear-wheel drive or four-wheel drive trim. 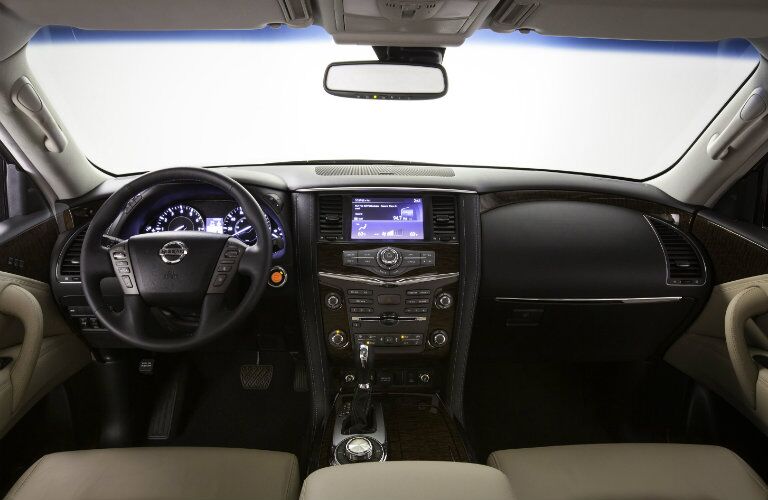 Hit the streets on the standard 18-inch aluminum-alloy wheels or cruise along on the upgraded 20-inch wheels on the SL and Platinum packages. Whoever is along for the ride will have plenty of personal space in the latest Armada. It is able to seat up to seven or eight passengers depending on which trim you choose and opens up to provide an enormous amount of cargo space.

As for technology in the 2017 Nissan Armada, rear seat passengers can settle back into the heated seats and will always be entertained, even on the longest of road trips with the Family Entertainment System with dual 7-inch color monitors. Up front, the driver and front seat passenger will not only have heated/cooled seats but also a variety of technology all within reach of their fingertips. The standard 8-inch touch-screen allows you to sync your smartphone, while the standard Bose premium audio system can be enjoyed throughout the entire cabin.

Drivers in the Glendale Heights area who are interested in learning more about the 2017 Nissan Armada are invited to come by and learn more about the overall design, advanced safety technology, and entertainment options of the all-new Armada. As soon as the latest Armada becomes available, we will be sure to let you know, and welcome you here to Glendale Nissan!